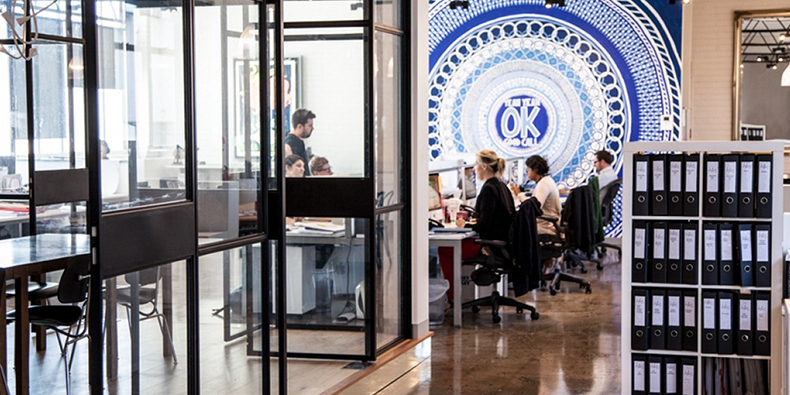 B&T recently asked us to ‘give them the skinny’ on the goings-on of our new office and culture. View the article here.

The suburb of Cremorne in Victoria, Richmond’s creative neighbour, is home to many of Melbourne’s creative and digital agencies. Now HBT Agency is one of them. Michael Berry, HBT Creative Director gives us the skinny on the agency’s new home.

When we were met with the need to relocate HBT’s offices 10 months ago, we were easily lured in by the area’s creative energy.

As an agency, we believe that the environment a company operates within can greatly influence its culture and productivity.

After successfully securing an empty former textiles factory on Cremorne’s Hill Street, the big task at hand was designing our office interior from scratch. Most importantly, we wanted our new space to encourage staff to work collaboratively. We achieved this by keeping the former factory’s open-plan layout; only including walls where absolutely necessary. In the spirit of collaboration, we hired Danish inspired furniture and interiors company Pierre + Charlotte to create an over sized communal kitchen table to accommodate the entire team.

Visitors to HBT are greeted on the staircase by a painting of a young Balinese boy holding a surfboard; a beautifully appointed artwork by artist Andrew Wellman that’s reminiscent of the island’s 1970’s surf culture. Upstairs is home to HBT’s most striking piece – a full-scale mural by Lucas Grogan – now the centerpiece of our expansive space.

Our renovations took three months from conceptualisation to completion – and the results today speak for themselves. Our last residence in South Yarra, although beautiful, is lackluster in comparison.

Beyond its artistic offerings, Cremorne’s many restaurants, shops and bars offer residents, workers and visitors alike a nirvana of eating, drinking and playing. It’s a must see destination for anyone living in or coming to Melbourne.

Some of HBT’s local haunts