Selling a life and death message 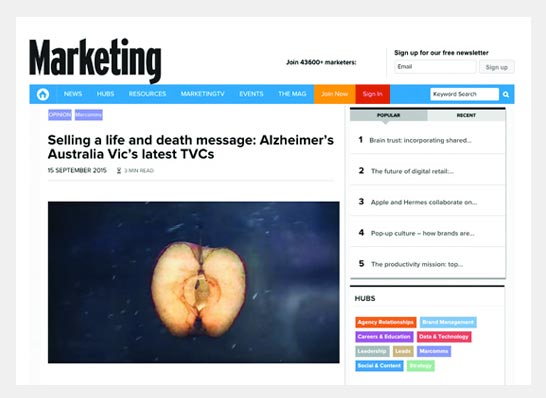 Selling a life and death message

Our latest campaign for Alzheimer’s Australia (Vic.) is really getting noticed. Here’s a story in Marketing Magazine about the thinking behind it. 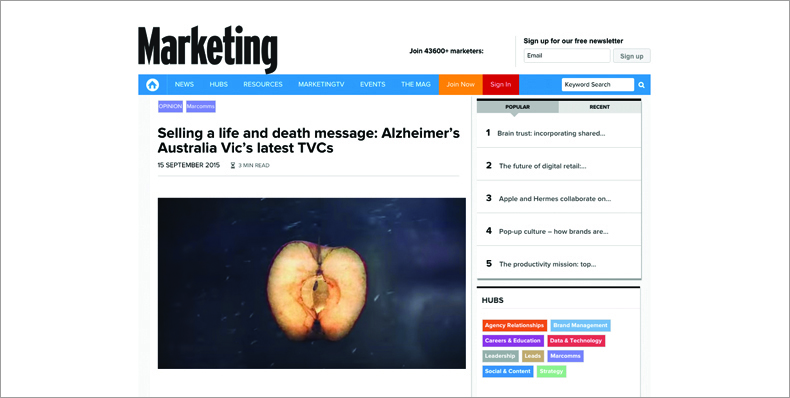 Dementia is Australia’s second biggest killer after heart disease and has a devastating effect on everyone who’s touched by it; those who have it, their families and their friends. And yet, most people underestimate the disease and its impact. As a result, Australians’ response to Alzheimer’s disease (and dementia more broadly) is not commensurate with the seriousness of the disease, and this has huge implications for our society. How best to tackle this – particularly given the sensitivities surrounding this subject?

Did you know dementia is Australia’s second leading cause of death after heart disease? If the answer is no, you’re not alone – more than 70% of Australians admit to knowing very little about dementia. This is just one of the startling statistics that began HBT’s journey with Alzheimer’s Australia Vic three months ago.

The fact that Australians lack awareness about the reality of dementia is not surprising, given the majority of Australians in a recent survey admitted that dementia is something they would “rather not think about”.

Unfortunately, awareness of some diseases – in this case one with very far reaching effects – has less to do with the seriousness and prevalence of the condition, and more to do with preconceived and widely shared attitudes towards the illness.

A marketer’s response to an urgent issue

Knowing how to confront important issues creatively is the reason not-for-profit organisations collaborate with marketers in the first place. And understanding of how to deftly communicate sometimes upsetting facts with respect requires an experienced touch, free from cliché and sensationalism.

In our work with Alzheimer’s Australia Vic, we discovered awareness – and public interest – in the disease was significantly lower than many other common life threatening conditions.
• In a recent Ipsos survey, Alzheimer’s Australia Vic found that:
• Almost a quarter of the population saw people with dementia as ‘frightening’,
• more than half of respondents professed dementia as something they ‘would rather not think about’, and

more than a quarter of the population believe this fatal disease can be cured.

As one of Australia’s biggest killers, the urgent facts of dementia initially had us scratching our heads as to how to address such a serious condition with sensitivity. The challenge we faced was: how to emotionally engage a largely passive and disengaged public. The objective of any social or behavioural change campaign begins with devising creative ways to engage as many people as possible, without compromising the values of the client it represents.

Alzheimer’s Australia Vic briefed us to help reset people’s understanding of dementia as a degenerative condition of the brain that kills, whilst also highlighting that people touched by the disease are not alone and there are support services available.

In discussions with our colleagues and family, it emerged many of them had been significantly touched by the disease, in emotionally challenging and taxing ways. Therefore it was apparent that it would be important to convey the wide reaching effect this life threatening disease has on the wider community, as a vehicle to attract some urgency in engaging the attention of Australians.

The conversation soon steered to the hard facts:
• More than 342,800 Australians are currently living with dementia – roughly double the population of Geelong, and
• without a medical breakthrough, the number of people diagnosed with dementia is set to soar, with almost 900,000 people expected to be affected by 2050 – that’s around 1 in 50 Australians.

Many years ago, I worked on the messaging for Victoria’s TAC. I was lucky to have spent some time working with Greg Harper, who devised the campaign. I learned a lot from him, and there were some interesting parallels with our brief from Alzheimer’s Australia.

The situation Greg and the TAC faced was dire. Victoria’s road toll, one of the worst per capita in the western world, was growing exponentially. Peoples’ lives were at stake. One key ingredient was identified as being necessary to persuade road users to change their behaviour. In that case, the ingredient was reality – people had to be able to imagine themselves in the traumatic situations that were depicted in order to re-evaluate their own behaviour.

In Alzheimer’s Australia’s case, we also identified a ‘key ingredient’ that helped people to see the disease differently. All of the research was telling us – sometimes directly, sometimes not – that people do not think of Alzheimer’s as a disease with physical, degenerative effects. Rather, very broadly, people see it as a condition initially characterized by an almost benign forgetfulness.

Our job, it transpired, was to show the disease for what it really is, to pull back the curtain.

The creative breakthrough in our campaign, the element around which the other elements of the campaign were ‘constructed’, was a visual analogy for the degenerative, physical nature of Alzheimer’s Disease (because it really does eat away at the brain). We came up with a rotting apple as a way to represent that degeneration.

From that point, scripting the spots with an eye to remaining sensitive to people currently living with the condition was also very important.

Another parallel with Greg Harper’s situation with the TAC was that we also had a client who was committed to doing things very differently if that’s what was necessary to affect change. Our client, Fiona Mason, knew we needed to be strong in our messaging – to confront the facts of the situation.

It was important to not shy away from illustrating the harsh realities faced by those who live with dementia – but rather, to focus on them.

The campaign has just launched and early feedback has been overwhelmingly positive: people are talking about the disease, and seeing it for what it is.