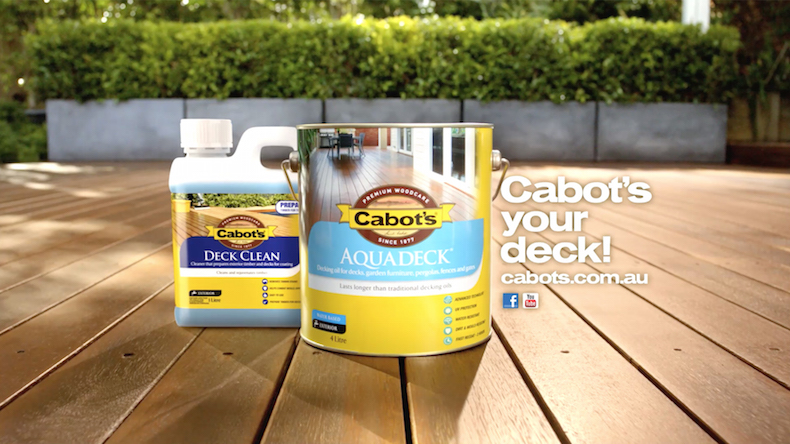 The footy season may be over, but the decking season is just starting. When HBT created a TVC for Cabot’s, Australia’s leader in timber coatings, particularly decking products, the end of the footy season was the perfect time to kick off an awareness campaign.

The ‘decking season’ starts when the football season finishes and consumers – mostly men – tend to get off the couch and think about the garden, specifically the deck.

Dennis Cometti and Matt Richardson were bought on board to commentate Cabot’s talent coating the deck, as if it was a passage of play in a football game, complete with siren and the roar of the crowd.

“When Cabot’s told us they were thinking about placing a message in the Grand Final, it made perfect sense”, said HBT’s Managing Director David Hayes. “The key to it all was the opening graphic – ‘The footy season’s over. The decking season’s just beginning.’ After that, the idea almost wrote itself. It’s turned into something much bigger than we expected – a celebration of decking and Cabot’s. Plus, it doesn’t take itself seriously, which is a central plank of the Cabot’s positioning.”

The ‘New Season’ campaign first aired on 11 September during the Friday night preliminary round, and has continued to air during subsequent games. It has also been broadcast during episodes of Talking Footy and Game Day, broadcast at quarter time of the Grand Final and played on the screens at the MCG to an estimated crowd of 100,000 attendees.

Read all about the TVC in Campaign Brief.